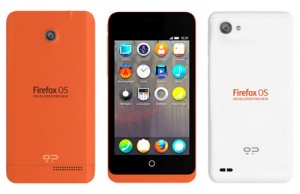 Mozilla has just announced that Firefox OS smartphones will go on sale as soon as this week. Among the partners that will be working on this launch are Deutsche Telekom and Telefonica who will release the first Firefox OS devices, and the ALCATEL ONE TOUCH Fire and the ZTE Open who will release their versions of devices running the Firefox OS possibly sometime in Q3 of 2013.

What are the Firefox OS Features? Firefox OS smartphones are the first ever devices powered completely by Web technologies (HTML5) and they will offer everything you would naturally expect from a smartphone while also delivering new features to give you a personal experience that is unmatched by any other phone. Firefox says its Operating System includes all the things people need from a smartphone out of the box – capabilities to call, message, send and receive emails, fully functional camera. Apart from this, Firefox OS also includes several built-in social features including Facebook and Twitter, HERE Maps with offline capabilities (stores maps locally) and smart walking, driving and public transit directions, much-loved features like the Firefox Web browser, a new ability to discover one-time use and downloadable apps and the much awaited Firefox Marketplace. Developers around the world have been working on producing apps that will run on the Firefox Marketplace during the Firefox App Days.

A brand new concept that comes to smartphones with Firefox OS smartphones is an adaptive app search that allows you to simply swipe to the right on your Firefox OS phone and start to type what you are interested in to get a customized phone experience based on your needs instantly. For example, if you search for your favorite music artist you get results including one that allows you to buy your favorite song, concert tickets where that artist is performing and ability to listen to the song instantly.

“The launch of Firefox OS marks an incredibly exciting time for the Web. Firefox OS powers the first smartphones built entirely on Web technologies and will stimulate an inspiring new wave of innovation for the Web,” says Jay Sullivan, Mozilla Chief Operating Officer. “We are proud to deliver an experience for first time smartphone users that will delight them and really put the power of the Web in people’s hands.”

Firefox OS phones come with Firefox Marketplace, which unleashes the power of HTML5 apps on mobile. The Firefox Marketplace offers apps in categories like games, news and media, music and audio, business and productivity so you can find an app for whatever you want – even local and niche topics including popular apps like AccuWeather, EA games like Poppit, Facebook, Nokia HERE Maps, SoundCloud, Terra, Time Out, TMZ and Twitter as well. Many apps however will be tailored locally and will differ by region.

This OS is an extension of the Firefox desktop and mobile browsing experience will integrate all the security, privacy, customization and user control Firefox delivers to its customers in a familiar way.

Firefox is working with more than 20 hardware and operator partners around the world to fill the need for a fully adaptable, unconstrained mobile platform to deliver a customizable mobile Web experience that people are missing today. The world is waiting for a more attainable smartphone experience; only 21 percent of global mobile subscribers have smartphones, according to Kleiner Perkins Caufield & Byers.

“Such a platform will have to meet challenging requirements in terms of robustness, scale, and openness. Mozilla and its partners are now moving definitively into the first wave of Firefox OS distribution. One of our recent surveys found Firefox OS to be more compelling to developers over Tizen, Blackberry and Kindle Fire, despite no commercial products being available yet. It is clear that influential members of the operator, OEM, and developer communities at both global and hyper-local levels see the potential of Mozilla’s Firefox OS to be that next platform.”

Check out a video demo below –