Why VISA Should Be Your Choice For Digital Payments 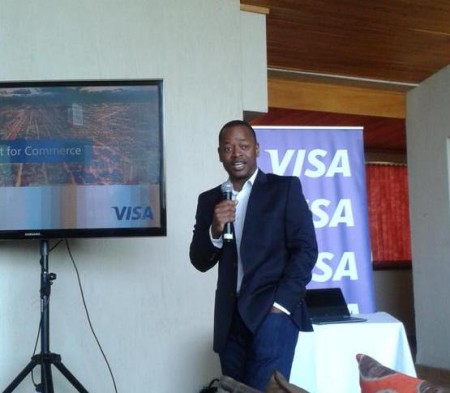 I never realised how little I knew about digital payments technology company VISA until I became part of the first ever VISA conversation in Africa talking about the technology behind the solution, which now allows users to pay for goods and services by just one swipe, providing a more effective and efficient way of making payments.

Visa can be used to make purchases at on-premise merchants such as supermarkets, fuelling stations or even shopping malls  as well as in the online marketplace that is now becoming the next destination for shopping as it offers a way to get goods and services without having to move from wherever you are. Anywhere you see a sign of ‘Visa Accepted Here’, then you know that card with a Visa stamp on it can help you make payments.

“Visa is not a financial institution, it is a technology company that connects financial institutions,” mentions Jabu Basopo, the General Manager Southern and Eastern Africa for Visa, in a matter of fact. He must have noticed the uncertain look on my face – if not on most of us clueless in the room – who assume Visa is just an ATM thing, after all it is always plastered on most ATM cards…right?

I could not have been so wrong and ignorant at the same time. With presence in over 200 countries worldwide and powering over 2.1 million ATMs and counting, Visa records up to 90 Billion transactions annually and with its high-grade technology and fast speeds networks it is able to process up to 56, 000 transactions in a second.

Talking of high-grade technology, Visa’s growth is dependent on three major things that involve incorporation of latest technologies, coming up with digital solutions through every now and then innovations and providing state of the art security so users can feel secure while making transactions.

Visa is expanding to the mobile platform and this can be witnessed through recent partnerships with Apple Pay (last year) and Samsung Pay (2015). When Samsung launched its latest Galaxy flagships at the Mobile World Congress, so did it announce that the devices would come pre-installed with the new payments service that Visa is one of the supporters.

Samsung Pay is supported by Visa Token Service technology, which replaces sensitive payment account information found on plastic cards, such as the 16-digit account number, expiration date and security code, with a unique series of numbers that can be used to authorize payment without exposing actual account details – helping to make mobile payments safer. The same works for Apple Pay.

First, Visa are the pioneers in the electronic payments with the first ATM networks in 1983 and for a long time they were the only players in the market until the likes of Mastercard who brought competition to the table, and I have to admit they have done good so far in catching up with presence in 210 countries globally.

While Mastercard is working to connect more institutions and businesses at faster speeds like its rival, it is worth noting that it is still behind in delivery as opposed to Visa.  Mastercard says it processes more than 23 Billion transactions annually and like I mentioned earlier, this is not even half what Visa can do in one year (90 Billion). Mastercard manages 40,000 transactions in a second, while Visa does 56,000.

So, Visa is faster in its transactions and at a time when consumers are leaning towards solutions that will save them time while carrying out transactions, Visa is surely winning. There is nothing more annoying than experiencing delays when you are trying to make a purchase, especially now with online and mobile payments taking over the shopping scene.

VisaNet is bound by latest technologies and innovations, already incorporating technologies like the Accelerated Connected Platform that allows users of Visa to connect directly through the Cloud platform and connect over the internet, covering the craze of Big Data, Social and Analytics technologies that is now being adapted by every organization.

The Visa network foundation is built on the IBM Z series processors that boast of being able to transact over 50 billion messages per second and that is only on one processor. VisaNet is built on up to 96 of those. Away from the processors, the Visa network uses over 2 million Kilometres of fibre optic cable in its connections and knowing about the fibre optic you already know that information moves pretty fast.

VisaNet says it has delivered performance to customers and merchants around the globe for about 40 years now, which is the same period that Mastercard has been in existence. It is through VisaNet that the 56,000 transactions per second is possible today.

I don’t know about you, but I sure was impressed and I plan on making use of my Visa card more often now and especially because I learnt that supermarkets should not be asking for your national ID or any other Identification card details when paying for services with Visa – gives me a reason to cause a stir and ask for the manager. Shopping smart is not complete without a little drama.