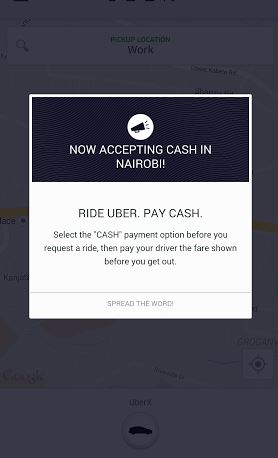 I’ve taken a good number of Uber cabs in the past 6 months since it launched and I have to say I am well impressed about 97% of the time.

Why? Because they’re friendly, the cabs are normally on time (save for this one time when an Uber told me the cab was 4 minutes away while he was really half an hour out) and they’re quite convenient for someone who’d prefer not driving everywhere.

The company has also enjoyed quite some good press and Kenyan consumers with an ever expanding middle calss seems to be well satisfied with their services.

If you wanted to take an Uber previously, well before ysterday, you’d have had to use your credit, or debit, Mastercard or Visa card to pay for the service.

But now, you can use cash. Yes, CASH!

One might wonder why the company decided to go this route but we think this is actually a good thing because consumers now have choice. Not everyone is open or able to own a debit card leave alone a credit card because of the perceived cost involved. So Uber decided to make this service available to anyone willing to use any form of payment.

The service will roll out gradually over the next couple of weeks so it will only be available to a small (but growing) user-test group initially.

What we believe here at JUUCHINI ‘:)’ is that Uber will also probably want to include a Lipa na M-PESA option in the next couple of months and this will make their services basically unstoppable.. that is is Safaricom agrees to provide them with that mythical M-PESA API.

I call it mythical as no insult to Safaricom but more because it’s been promised severally but very few, only one company later acquired by Safaricom infact, has seen this successful integration into their platform to our knowledge. Remember M-Ledger? Yes, those guys.

So if you do not have the cash option on your Uber app, please be patient as the service rolls out to different consumers.

If you do actually become part of the testing group, feel free to give feedback to Alastair and his team on support.nairobi@uber.com or via Twitter by leaving them a tweet on @Uber_Kenya.