Trends That Shaped The Kenyan eCommerce Space in 2015 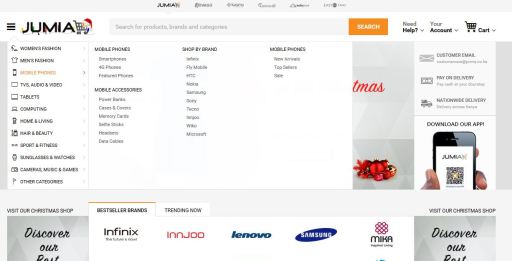 2015 has been an impressive year for e-commerce in Kenya. More and more consumers this year alone chose to turn to the online space for the 3 vital components in the purchasing funnel that influenced their purchase decisions:

Individuals, local and international brands that launched and sell their products online (some exclusively) this year , 2015, announced good successes thanks to the death of the middlemen through the web space.

The potential for massive growth continues to return a positive outlook in eCommerce in 2016 which makes it impossible to ignore. The question begs however – What really made 2015 a boom for the virtual commerce?

The Online Marketplace – Platforms that allows merchants to showcase their products by listing them on an e-commerce website or by opening a shop-in-shop on the website stocked with their products thereby transforming their physical store to an e-store to bridge the gap between offline and online sales. The merchant is able to monitor sales as well as pending, shipped and cancelled orders on their own using the seller center portal.

The program first launched in Kenya by Jumia in July 2014 became an overnight success with companies like Bata, Nairobi Sports House, Armco and Toy World among others moving to open their virtual shops on the website while international brands like Infinix, Innjoo, Microsoft, Fly Mobile, Maybelline and Binatone among others opted to use the platform as an exclusive Launchpad to penetrate the Kenyan market and launch new product models.

Soon, competitors within the same space in the same year also launched the program allowing merchants to list and sell across platforms reaching a wider market and realising better profits with more competitive prices, a wider product catalogue resulting in consumer confidence and a boom for e-commerce.

Mobile Commerce – The year also saw most e-commerce companies position themselves better to capture the market share by developing mobile shopping applications optimized to load faster and offer a seamless shopping experience through the integration of mobile money payment services courtesy of network providers such as Safaricom, Airtel and Orange among others.

In November this year, Hellofood a website that allows you to order for food from your favourite restaurant online and have it delivered to your office or home announced that it had scrapped card payment option in favour of cash on delivery and mobile money transfer payment options due to low adoption and use. Jumia also announced that 55% of its Black Friday orders were placed via mobile applications.

OLX a seller-meets-buyer kind of online marketplace also revamped its mobile application while Biznet – a similar business model to Kaymu launched for a piece of the cake.

Affiliate program and social commerce – The affiliate program a type of performance based marketing that allows ‘middlemen’ to promote a company’s products on different online platforms including own social media accounts and get commissions on items purchased via the promoter’s link has also been a major contributor to the growth of e-commerce in Kenya.

The program pioneered in Kenya by Jumia saw the listing of thousands of individuals and hundreds of bloggers within the first three months to become an integral part of the overall business plan of every e-commerce company in Kenya giving rise to the now popular social commerce that allows customers to buy products promoted on social media sites and complete the transaction within the same platform.

Offline retailers and Pick-up stations – Offline and online became friends, they both realized they could benefit from a mutual relationship. Retailers adopted e-commerce as a bridge between offline and online to reach a wider market.  E-commerce companies like Kaymu now allow sellers to list online and have the customer collect the item offline from the retailer’s store without playing intermediary.

Partnerships between e-commerce companies and courier/logistics companies made it possible for consumers to collect products ordered online in a Posta Kenya office near them, Aramex or G4S offices among others and pay upon collection. Through this initiative, Jumia reported a 15% increase in product delivery in remote parts of Kenya including Mandera.

What’s In Store For 2016? eCommerce has come far and fast and the speed of adoption is at breakneck with lots of potential remaining largely unexploited. As Kenya heads into 2016, we can only wait and see what’s in store for us in the business that has become part of our lives. Things can only get better and your guess is as good as mine.