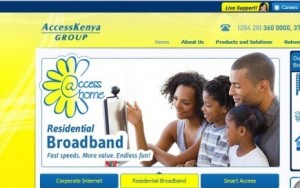 AccessKenya Group has announced plans to connect over 20 Kenyan towns on its expanding fiber network by end of 2013. The company even has an office in Nakuru. During the launch of the new office in Rift Valley, Kris Senanu who is the company’s MD says the company is executing a national expansion program in a bid to benefit from the up and coming Kenyan system of government that has began showing head in most parts of the country. In a quote he explains “We have positioned ourselves as the next generation service provider and for us, we are strategically working to deliver specialized IT services to all counties within the next few years,”

The fact of the matter is that there are increased opportunities and growing need for services beyond internet connectivity that are driving the company’s revenues especially from the county level. These services include managed services for a variety of clients that they acquired when they took over Open-View Systems sometime either in late 2010 or early 2011.

Senanu however is calling on the Kenyan Govt. to streamline revenue allocation to the counties saying that if managed well, the county system will create massive job opportunities in the telecommunications sector which will positively impact on the country’s economic growth. Meanwhile, the MD highlighted the rapid expansion of banks, multinational enterprises and other financial institutions as some of the key target clients for AccessKenya noting that such development will require specialized IT support from telecommunication service providers and for which AccessKenya is taking the lead. This comes in the wake of expansion plans by some local banks like Family Bank and Equity that have been planning to get good presence in local counties. AK has so far connected all major towns along the western route covering Naivasha, Nakuru, Eldoret, Kisumu, Kericho and soon to Kitale as well. AK Group claims to have allocated over 10 Million KES for the second half of 2012 towards this expansion program with the aim of creating the required hops to connect towns already on the planned coverage grid. The amount is an addition to 110 Million KES allocated towards fiber expansion in Nairobi region at the beginning of 2012.