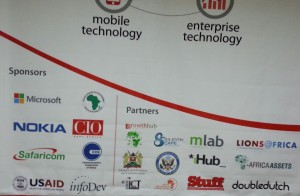 There has been an amazing renewed commitment by the stakeholders to headline at this year’s DEMO Africa, an affiliate of the global DEMO conference that is first being held in Africa, and more specifically Nairobi which is Kenya’s capital. DEMO is a platform that seeks to connect innovative startups with growth and venture capitalist funds to allow them an opportunity to pitch for growth capital and strategic partnerships to the tune of a total of 66 Million USD.

The following stakeholders in Kenya’s Information and Communication Technology sector have reinforced their commitment in working together with African governments in a bid to hasten the growth of the continent’s vibrant innovation drive:

Francis Wangusi, who is the CCK’s Director General, says the adoption of the innovations in the society will be driven by the participation of the public and private sector, a trend that is steadily becoming the norm. He urged more players to play a significant role pointing out that the Kenya’s Vision 2030 advocates for the provision of incentives to create new knowledge and innovative systems. Thus far, Kenya and especially our young tech savvy generation have flown our flag high in their valuable innovations that have won them international accolades.

“We appreciate the work that the public and private partner organizations have done towards the DEMO Conference that is being held in Africa for the first time. We also wish to acknowledge the work that has been done through the Liberalizing Innovation Opportunity Nations (LIONS@FRICA) Partnership. This is a clear indication that public-private partnerships are necessary in catalyzing the growth of African economies. To ensure that these innovations are adopted in society, the Commission urges more organizations to come together and provide the much needed support.” Wangusi stated.

Africa’s franchise owner and CEO at CIO East Africa, Harry Hare, spoke highly of Mpesa’s (Safaricom’s money transfer service) as a global example of Africa’s potential to steer innovation in the ICT sector. He noted “We are on the edge of a technology entrepreneurial revolution which requires the participation of both the public and private sectors to take off. What we are looking at now is the making of technology billionaires in dollar terms from the continent and creating massive job opportunities as they grow”.

Safaricom who have long been planning a launch for their mobile applications’ marketplace for indigenous applications also threw their weight behind the DEMO Africa initiative right up there with Africa Development Bank (represented by Gabriel Nagetu at the sponsorship announcement) and the Communication Commission of Kenya (CCK) who have now joined existing sponsors US State Department, USAID, Nokia, Microsoft and Infodev. 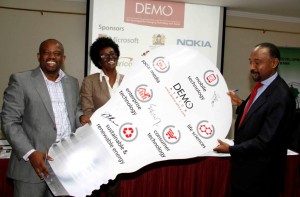 Safaricom, who did not attend the press conference however are in support of this initiative and have Nzioka Waita who heads up Safaricom’s Corporate Affairs. He noted that “We recognize that huge app development talent exists in the emerging markets and in fact, only such developers can provide applications suitable for their respective markets. Demo Africa therefore provides us with a unique opportunity to harness these talents and address core issues impacting this growing sector. In addition, the regional dynamic introduced by this conference provides us with a platform to learn from our friends and neighbours. As Safaricom, technology is the backbone of our very existence and supporting initiatives such as this by Demo Africa are important to us a company.”

“The nexus between ICT and economic growth has already been established. The critical element that is missing is increased investment in ICT infrastructure, which can only be achieved by increased collaboration between the public and private sectors since the initial capital outlay can be prohibitive to individual investors,” says Gabriel Negatu, AfDB Director in charge East Africa Resource Centre.

According to 2009 DEMO demonstrator research study conducted by BluePoint Ventures, in the past 20 years, 22% of past demonstrators received funding within 60 days as a direct result of a DEMO launch. 92% of these startups that secured funding, did so within 9 months of DEMO where 62% received over $1 million in funding – mostly from venture and angel investors. In just the past five years, DEMO companies have raised over $4.5 billion dollars in the months/years following their debut at DEMO.

The 2 and a half day conference to be held on October 24th – 26th, at the KICC in Nairobi, Kenya will provide a platform for the start-ups to launch their products to an audience of potential investors, corporate acquirers, government dignitaries, policy makers, academia, development organizations and global media.