Orange API Developer Challenge Is On 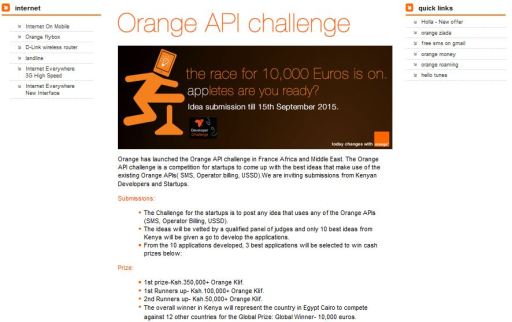 The main aim of this competition is to spur and nurture the creation of unique and local services for Africa and the Middle East from the growing entrepreneurial base developing in these countries.

Startups from France have also be invited to submit their innovations which are expected to bring design and development of some new services for users in Africa and in the Middle East.

Submissions are open from 3rd August to 15th September 2015.

10 start-ups from each country will be selected to compete until the end of October 2015 and the competition will be based on 3 APIs:

Each of the participating 13 countries will identify and reward one winning project, with one global winner awarded a 10K Euros prize to be announced in November 2015. Kenyans are also in the running to win this.

The event was also held last year and over 90 developers from four African countries participated in the 2014 challenge. The result of their participation was a range of new services being launched including the winning project mLouma – a start-up from Senegal that developed a portal for m-Agriculture to connect buyers and sellers.

Using Orange APIs, mLouma created a USSD and SMS version of their portal and were able to start charging customers after integrating the Orange Carrier Billing API. This is a great example of how startups used this technology to create revenue and become sustainable.

Local submission deadline is September 15, 2015 after which a total of 10 proposals will be shortlisted.

These 10 will then be tasked with the work of developing their applications for submission to a judging panel by November 1, 2015.

The final contest will be held at a global level on 25th November 2015. You can register to participate here and you just could be the KES 1.1M global winner.