Now A Samsung Galaxy S6 You Can Take Swimming 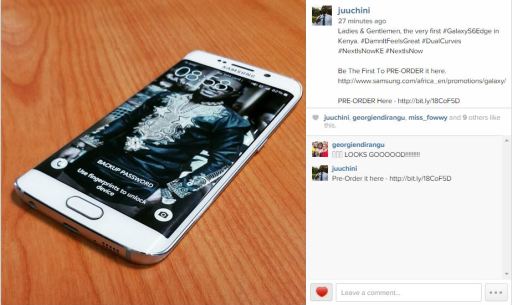 You thought S6 Edge as the best Samsung flagship? Here is a reason to change that thought. We are still waiting for the Samsung Galaxy S6 and S6 Edge to be available come April 10th globally so we can play around with it, we have not even had the chance to get enough of the cool curves on the S6 Edge and yet there are speculations of the untold rugged version of the Galaxy S6.

Galaxy S6 Active is the name and those who thought the S6 pair as disappointing for not spotting the waterproof feature that was present in previous Galaxies can now relax because the Active will allow users to dunk their smartphones in water as it comes waterproof.

Reports from SamMobile – the site that has not gone wrong in its Samsung leaks – say that the Galaxy S6 Active with model number SM-G890A will now bring the waterproof feature to the S6 flagship among other rugged features that were not incorporated in the two.

Like the standard Galaxy S6, the Galaxy S6 Active is expected to feature a 5.1-inch QHD Super AMOLED screen display, will be powered by Samsung’s Exynos 7420 chipset, will spot 3GB of internal memory and 32GB in storage. There is no word if the S6 Active will have the other 64 and 128 GB variants, neither is there word on support for a MicroSD card.

While it may not provide an option for a removable battery – another feature missing in the S6 pair – users may be content with the larger 3500mAh battery to come in the Galaxy Active, trampling over the 2550mAh found in the S6 or the 3220mAh battery present in the Galaxy Note 4.

And as the Galaxy enthusiasts may be looking to go for the slimmest of the devices, it is not entirely disappointing that the Galaxy S6 Active is a bit thicker at 8.8 mm instead of the 6.8mm on the standard S6 – I mean, it still is slim, and if you love rugged the S6 Active will have to be the best of the S6 flagships.

With Active versions being available for the S4 and the S5, this news may not be as surprising but is sure going to be good news for many who love the edginess of a little ruggedness. Who wouldn’t want to try water dipping the S6? I definitely would.