Periscope Is Now Available For Android KitKat And Lollipop 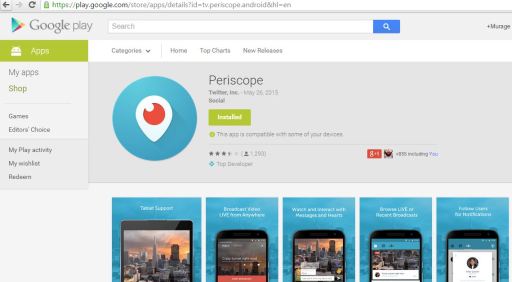 Periscope has launched on Android.

Periscope started with the aim of creating the closest thing to ‘teleportation‘ by providing users with the best way to start or watch a live video broadcast.

As a small startup, the initial launch was limited to just iOS, but now the company has crafted an experience that feels special on Android, yet still unmistakably Periscope.

Any Android user with Android Version 4.4 or Version 5, commonly known as Android KitKat and Android Lollipop respectively, can download Periscope from Google Play.

The Android app still has all the same core features that Periscope users have become familiar with: start a public or private broadcast, choose to allow comments from just those you follow, and interact with a broadcaster by chatting or sending hearts.

However, there are a few things that are unique to the Android version of Periscope:

I will be playing around with Periscope in the next couple of days and will let you know how good the app feels or what its main features are. Keep it here.